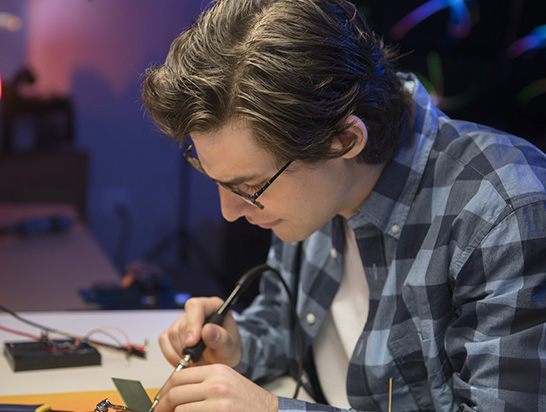 FIERA (Fully Integrated Electronic Room Assistant) is the virtual assistant inhabiting TEECOM’s Research Lab. We described how FIERA coordinates and regulates all the interconnected systems, responds to voice commands, and manages the space.Today, we talk about how an impulsive gear purchase led to a new way for us to connect with our environment, shaping and deepening our connection with our lab.

In R&D, we think of ourselves as wearing many hats. We spend a fair amount of time tinkering, learning, and innovating. Sometimes we wear the explorer hat: we start out on a project unsure where it will lead (if anywhere). Such was the case with Project CinemaScope, a project that began when I bought a cheap illuminated cinema marquee sign online. The sign is an appealingly retro object; I thought it could add some character to our rather industrial lab space. I couldn’t have known this impulse buy would, in fact, lead to a transformation in how we interacted with the lab, and, in a new twist, how the lab grew to interact back.

As we said in part one, we believe there is an evolution occurring in the way we all interface with buildings and spaces. We see artificial intelligences such as FIERA becoming integral to the built environment, able to “own” certain rooms and systems and manage many tedious and time-consuming tasks.

But information and automation are just two aspects of a successful work environment. The other aspect is emotion. The influence and value of emotion in the workplace has recently gained a foothold in business strategy. Many studies show that positive emotional connection increases employee engagement. In the workplace, people form emotional connections — positive or negative — with their co-workers, culture, and organizational mission. We’ve learned the best interactions we’ve had with our environment are the ones that feel the most natural, the most familiar. An intrinsic emotional connection to our environment leads to a more productive experience within it. Therefore, as technology designers, if we can design a smarter space that evokes a greater emotional response, we're more likely to generate a more fulfilling experience and a better overall connection with the place we spend over 40 hours a week.

How Technology Creates a Personality for Buildings

The goal of TEECOM R&D is to investigate how to improve the user experience within buildings through technology. Sometimes, this manifests in explicit utility, where we look into whether, say, integrating an ambient lighting system with a weather service to adapt lights based on time of day will improve employee productivity. Other times we investigate unconventional concepts or experiment with new technologies, without necessarily having a specific endpoint or goal. That’s where Project CinemaScope started. I felt this cheap-o marquee sign had potential: illuminated, spelling out “TEECOM RESEARCH LAB,” I thought it could add a bit of flair to our lab space. Ever the tinkerer, I pulled it apart as soon as it arrived and enhanced its (extremely limited) capabilities. I turned a simple light box into an animated extension of a room, imbued with character through visual and audio enhancements.

After all was said and done, our “meh” marquee sign had been transformed, now equipped with the technology to make it flicker and buzz like a fluorescent light. Installed in the lab, its look and feel provided an interesting combination of vintage style and whimsical behavior that gave it a near-life-like animated affectation. Like all the other hardware and technology before it, the sign, too, was then connected to FIERA and The Hub. This allowed us to more easily activate the various effects and manage the sign over time.

A New Kind of Storyteller

I have always had a passion for theatre and the dramatic. This new and exciting piece of hardware had too much artistic promise to end the project right there. I imagined a short scene that would use built-in elements of the lab to (hopefully) transform the sign’s flicker into a more holistic performance. FIERA (The Hub), our omnipresent lab manager, was programmed with new theatrical capability. We crafted a series of scripted actions — for example, before the sign flickered on, the ceiling lights dimmed, the Philips Hue lights added some background color, and the TV turned off — which we taught to FIERA, along with other sound effects, et al. With all of the necessary hardware already unified and cooperating through The Hub, running this series of timed actions was a cakewalk for FIERA’s intelligent framework.

As this performance played out for the first time, the full effect surprised us. Floored us, is, perhaps, a more accurate statement. Our lab, this industrial nucleus of creativity and engineering, somehow made us forget it was, in fact, just our lab. It felt …different, but familiar. It felt like watching a movie in a theater; after a while, you kinda forget you’re sitting in the theater (especially if the movie is particularly captivating). In the span of about 30 seconds, we had experienced the same. We had created an emotional connection to the space. The lab charmed us into forgetting we were just standing in our lab.The lab surprised us by coming alive. “But it’s just a room!” you say. And you’re right, it is! Yet somehow it felt like there was more to it: That the room dimming its own lights (or, to be more precise, FIERA dimming the lights) was analogous to some puppet master pulling the strings to set the scene. You know the puppet master is there, even though you can’t see them, but still you’re able to relate to the scene playing out. Even though we’d programmed the actions into FIERA, they still felt, in a way, real.

The Ghost in the Machine

We continued our testing. We taught FIERA some new scenes to perform within the lab; after our first success, we put a lot of thought into FIERA’s theatrical capabilities. We wanted the elements and scenes to be unique but still feel familiar. After crafting a few of these sequences, almost basic in their technical simplicity, we realized that FIERA could, indeed, inspire continuous, unhindered, and new emotional responses from us. The whole effect was truly greater than the sum of the parts.

These Are Not the Clones You’re Looking For…

These real-world animated scenes can add an element of unique variability to a normally impersonal architectural space. To know that when you’re walking into a room it’s not necessarily going to be a clone of the room next to it. That it may have something beyond the typical or the expected.We think the best kinds of spaces are ones you have a positive, lasting impression of. The ones that provide the best experiences are the spaces which are comfortable, natural, and encourage productivity. We think the future of spaces are ones you have a stronger emotional connection with, spaces that can adapt, evolve, that can perform, even think. It turns out that animating integrated technologies can, too, evoke these meaningful connections.

I had just purchased a $20 cinema marquee lightbox on impulse. When I opened it up, it was much more cheaply built than I expected, so my inclination was to take out the guts and improve it. It was battery powered, for example, so I upgraded it with a long-lasting external power supply. Then, I thought, why not add some intelligence so it could power itself on and off? Remotely? With sound effects? You can see where it started to snowball.I iterated through feature sets, adding hardware as needed – e.g. after I added brightness control for the lights, and inspired by the old-timey feel of the marquee lightbox, I decided the near-flawless nature of the LEDs wasn’t retro enough, so I built in a series of “flicker” effects to emulate fluorescent lights, complete with sound effects of fluorescent lights fizzing into action.At last, after selecting hardware and designing components to perform all of the ever-growing list of effects I had come up with, hardware which included an Arduino Mega, Wi-Fi, power and lighting, and a sound board, the next challenge was how to get this hardware attached to the marquee box. I couldn’t put it inside the box itself, since that would have affected the lightbox function, so we decided to house the electronics in a “backpack” that would attach to the bottom back of the sign. I designed the casing in a CAD program which allowed us to model mating features specific to the lightbox, and printed the backpack on a high-resolution SLA 3D printer, creating a very clean, finished-looking product. A couple of trial prints later, I affixed the finished product to the back of the sign, routed the wires, hooked in our Wi-Fi antenna, and it lit right up. 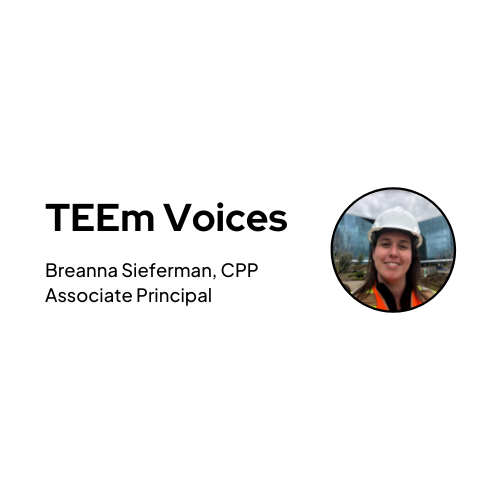 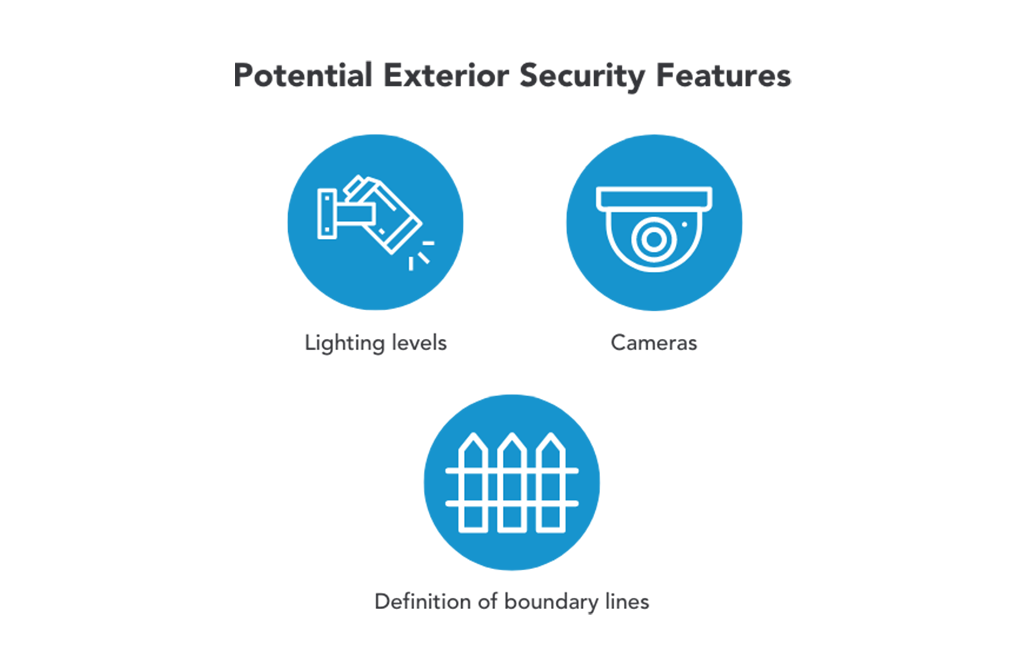 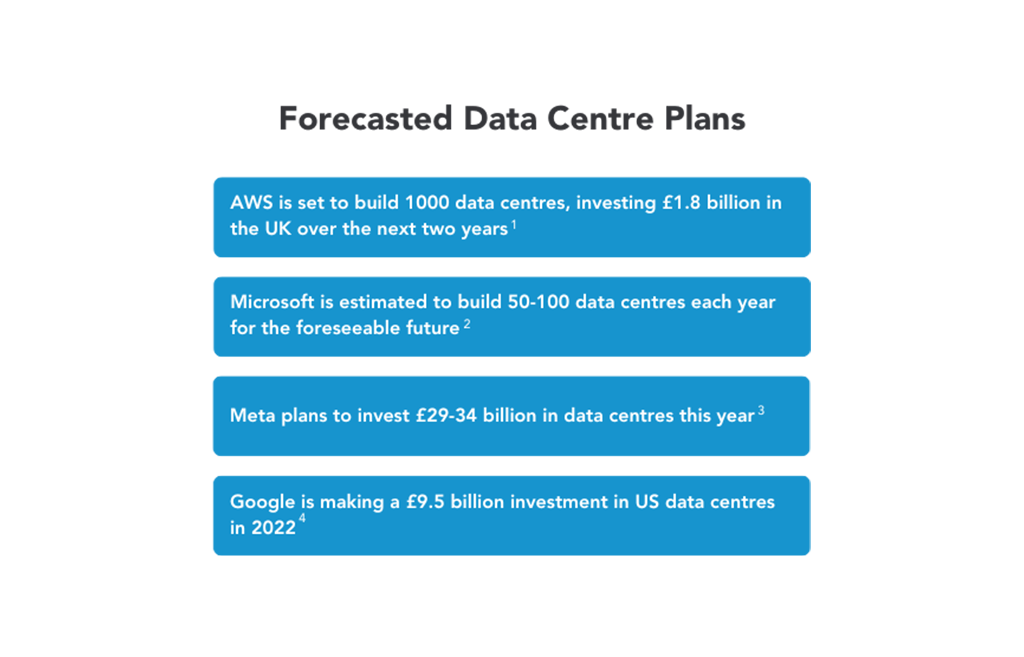